← The marshmallow experiment, part 2
The locks of love… →

Despite all the baking programmes I’ve been watching of late, and the picture below, this is not actually a post about cooking. There will, perhaps, be cake related posts on this blog in the future though.

Today I’m thinking about an interesting article I read on the way home in London’s free weekly magazine, Stylist. The article, “Just. One. More. Bite.” was encouraging readers to try investing in willpower instead of making New Year’s resolutions that will be abandoned before the end of January.

Personally, I’ve tried not to make specific resolutions this year. To be honest, they’re always the same anyway:

The third, writing more, seems to be in hand. The other two seem to be horribly intertwined and unapproachable, like a drawer full of old necklaces that you’d like to wear but abandoned long ago because the effort of untangling them will just be too much.

But just think, if you did untangle all those old necklaces, you’d have loads more jewellery you could wear. Pretty, shiny jewellery. (Guys, if you’re reading this, think cables. Pretty, shiny cables that you keep in a drawer, even though you have no idea what they’re for.)

But what’s all this got to do with marshmallows?  Well, according to the article,  in 1972 (Stylist says ’68, but Wiki says ’72) a bloke called Walter Mischel of Stanford University conducted a test which is known as the Marshmallow Experiment. The test subjects were children (aged 4-6), and each child was taken into a room in which there was a plate with a single marshmallow on it. They were told that they could eat the marshmallow if they wanted to, but that if they waited 15 minutes they could have two. The child was then left alone to decide what to do. Some children simply ate the one marshmallow they were given, but some waited patiently (perhaps covering their eyes so they weren’t tempted or, according to Wiki, “stroking the marshmallow as if it were a tiny stuffed animal“).

The kids who waited got two marshmallows and learnt the lesson of delayed gratification. Follow-up research showed that those who had learnt the lesson went on to have higher academic achievement, and those who didn’t were more likely to have behavioural problems and trouble paying attention in class.

The Stylist article emphasised the importance of willpower; that rather than just denying ourselves the things we want (which will only make us want them more), we should learn to exercise our willpower a bit more, and resist the temptation of instant gratification. That doesn’t mean you can’t have your cake and eat it too, it just means you ought to wait a while between the buying and eating (if you’re baking, I’m not sure where “licking the bowl” fits in to this test, but I’m pretty sure it’s ok).

I need to give myself a marshmallow test. As I mentioned in a previous post, this is my year of being frugal and learning to save up for the things that I want. It’s the first time I’ve ever really tried to save up, and I’m finding it hard already.

Losing weight and saving money may seem like two separate goals, but when I start trying to untangle that twisted mess of chains it becomes quite clear that they have huge impacts on each other. I tend to run in viscous circles: I try to go on a diet, but then I get hungry or something else stresses me out, so I ignore the fact that I have a whole bunch of tasty (not cheap!) fruit and other snacks at home and go on a Sainsbury’s rampage for chocolate and other naughties. I have a night of over-indulgence, spend too much and eat too much, and feel bad about it all in the morning.

If I planned out delicious, nutritious meals with a light sprinkling of yummy but healthy snacks, I could save money and, most likely, lose weight too.

So, how’s my marshmallow test going to work? Right now there is no chocolate in my house (except Options hot chocolate, which really doesn’t count). Next time I go to the supermarket for groceries (not mid-week in a crazy fit of hunger, but for a weekly shop with a sensibly prepared list), I shall buy one, reasonably priced bar of chocolate. The chocolate will sit in my fridge, where I will occasionally stroke it as if it were a tiny, hard, cold animal. Eventually, I will eat it – when I really, really want it.

I won’t cheat by buying extra chocolate along the way. That would bust my diet and budget in one swift punch.

Let’s see if this experiment works… 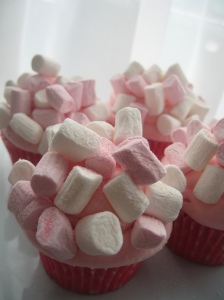