In my job, I have a lot of contact with utterly brilliant people; people who are at the top of their professional field, or young individuals with more potential than my entire year-group had at school. But what makes these people the best? Is it their upbringing? Is it because they went to the best schools, didn’t have to work as a till-monkey in between university classes, and had rich parents who took them abroad multiple times a year? Or is it just that they were born that way?

Of course, this line of thought could lead to the question of what classifies one person as better than another anyway. What I mean by “better” is that some people seem to have the whole package (and then some), while others don’t even know how to open the package. Some people are able to hold intelligent conversations on a wide variety of topics in multiple languages, while others can barely string a sentence together with correct grammar in what is supposed to be their native language. Some people have incredible lives planned out before they even graduate, others leave school at sixteen and end up stacking shelves in a supermarket.

Don’t get me wrong though, I’m not saying that there’s anything wrong with stacking shelves in a supermarket or working in a shop. I’ve certainly done my fair share of menial jobs, and I’m well aware that without people doing these jobs the rest of society would break down. I’m also not classing myself as one of these “brilliant” people. Far from it – I’m in awe of some of the people I come into contact with (and utterly jealous of some of the young ones who don’t know how lucky they are). I realise that a fully functioning society requires people of all levels of intellect and ability – I just want to know what makes them that way.

Another related thought I’ve been having this week is to do with appearance and the impression we make. Say you were hiring at your company and had two candidates to choose from. Both have straight A*s throughout their entire academic careers. Candidate A went to either Oxford or Cambridge University, and arrives wearing a crisp dark suit. His hair is slicked back, clean, short and he speaks with perfect “BBC pronunciation”. Candidate B went to a perfectly good university which wasn’t Oxbridge. He arrives wearing a crisp dark suit, has long hair in a ponytail and his ear pierced. He speaks with a northern accent. On paper, these two men are practically identical. Which one would you hire?

Of course, body language and personality would come into the decision, but my money’s on Candidate A. Candidate A has, perhaps,  been more fortunate in his upbringing and been offered different opportunities to Candidate B. However, they are both very intelligent young men who deserve a chance in life. I would actually rather hire Candidate B because his appearance and background show a little more personality, but I think I’m in the minority.

I’ll continue to ponder. Do you have any thoughts on this? 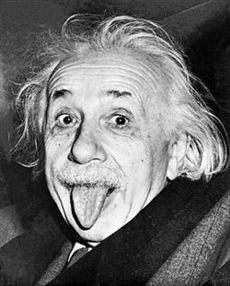 Einstein - Brilliant, but his hair was kinda long...