Britain’s got talent, but…

I admit that for the last 7 weeks or so Britain’s Got Talent has been my guilty pleasure. I’ve cheered on the good acts, laughed at the terrible acts, and cried at the ones that tugged on my heart strings). It’s amazing to see how much talent there is in this country (and how many nutters there are too).

Tonight was the final and, if you haven’t seen it yet, I warn you now that this post does contain spoilers.

The show tonight contained 11 thoroughly entertaining acts. In my opinion, some deserved to win more than others, but they did all deserved a place in the final. The finalists were:

When the results were announced, the top three were Only Boys Aloud, Ashleigh and Pudsey, and Jonathan and Charlotte. I thought it was a real shame the Loveable Rogues didn’t make it into the top three, as I really enjoyed their music and thought it was great that they were brave enough to play something original. I would go out and buy their album tomorrow. Here’s their song “Lovesick”:

Only Boys Aloud were probably the finalists who would have made the best use of the £500,000 prize money, as their choir master clearly had ideas for the future. Sadly it was announced that they were in third place.

This meant that the top two acts were Ashleigh and Pudsey:

And Jonathan and Charlotte:

The winner was voted by the viewing public, and I knew that the chosen act would reflect the interests of the nation. Both acts were entertaining, but for me the clear winners were Jonathan and Charlotte. I mean, just listen to those voices!

Unfortunately, the great British public is a nation of animal lovers… and the dog won. Yes, Great Britain voted for Ashleigh and Pudsey, and now this is one rich pooch. 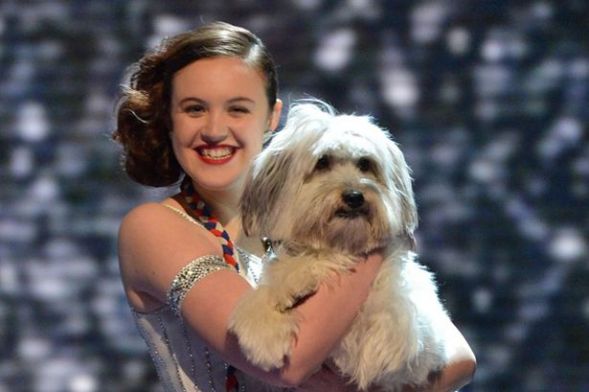 Don’t get me wrong, the act was very entertaining and that is one talented dog, but was it really the best act in all of Britain? No. It’s hard to choose one winner because there was so much variety in the show. It’s not just a singing contest, or a dance contest. But, clearly, Britain has gone a bit soft in the head to choose a dancing dog as the winning act.

I feel cheated, but at least Jonathan and Charlotte will hopefully have gained some confidence by coming second, and I’m sure they will go on to great things!  You see, Britain’s certainly got talent, even though the voting public seem to enjoy “lighter” entertainment.

4 Comments on “Britain’s got talent, but…”

Just messing around at the end of Floor and Flow tonight... 😜
Floor and Flow tonight was great! It really inspired me to start writing my next show routine for April! 😘
And of course, weekly Jasmine! It was a bit of a challenge on a 40mm pole, but after many attempts (and lots of grip!) I got there! 💪😘
Pumpkin came to the studio to support us all today, which was very tiring work! She was such a good girl! Thank you pumpkin (and @robynpoledancer) 💜
That feeling when you get your reverse grab back! 🤩 I got it before Christmas on this pole (which is 40mm rather than the 45 I usually train on) and then I 'lost' it. But I came to practice today to do this, and I'm so proud. I nearly didn't go to practice at all today and I'm so glad I did now! Thank you all for the support! 💜
Really blooming, as I intend to! 💐☺️💜
Loading Comments...
%d bloggers like this: