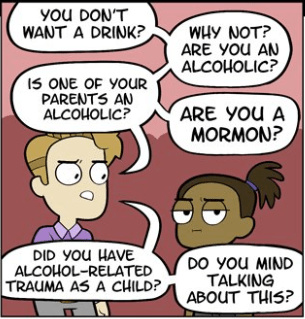 I made a decision around this time last year that I was going to stop drinking. Like most diets and New Year’s resolutions, I thought it would probably be a January thing, and that come February I would drink again.

I’ve never been a massive drinker, often making one or two drinks last the night or opting for soft drinks, but around this time of year I would usually drink more – doesn’t everyone? Christmas parties, birthday parties, New Year’s parties – all of that socialising so often revolves around the idea of ‘going for a drink’.

Ali two-drinks at the office Christmas party in 2013

It’s been a long time since I drank so much that I had a hangover or felt sick, and I think I’ve only once not really remembered what happened the night before (and that was back when I was a teenager), but over the last couple of years I’ve been noticing that drinking just doesn’t make me feel very happy. Alcohol is a depressant, and it seemed to me that drinking was just bringing out the gloomier side of me (and goodness knows I don’t need any help with that!).

So, I decided to stop.

I haven’t drunk anything since last New Year’s Eve, and that was only one or two glasses of Prosecco if I remember correctly. When midnight came, I put the glass down, and that was the end of that.

I know that for some people quitting drinking is a massive challenge, so I don’t want to belittle the efforts of others by saying that for me, it wasn’t so bad. I didn’t have a problem – I never used drink to cope with life or hide from my problems, but I know many people do, and I wish them well on their journeys. For me, the hardest part of quitting has been explaining to others that I don’t have a problem – I’m just choosing not to drink.

You’d be amazed how many people seem to care so much about what another person consumes. At times it can be quite alienating, when everyone around you is drinking, and especially when they try to get you to join in.

Luckily, my main hobby – dancing – is not one which is attached to a strong drinking culture. Generally, drinking doesn’t make your ability to dance any better (I know this, having tried a whole class of double turns practice after two-for-one cocktails in the past), so it’s often avoided in the salsa community. In fact, my main salsa home is in a church hall where alcohol isn’t even allowed.

I’ve also been lucky to have been welcomed into a local group – the Sober Circle – which organises alcohol free events and meet-ups in the South West. It’s a supportive group of people who are all coming at sobriety from different angles, all open to hearing each other’s stories and listening when someone needs it. Sometimes we meet for coffee and cake, and it’s nice to just chat to some different people with one common choice.

Is sober life dull? Hell no. I’m just as social as I’ve ever been, with a clearer mind and a slightly healthier body. There are plenty of alcohol-free options out there these days and, you know what? Water actually tastes pretty good too.

So, if you’re thinking of giving up alcohol, even if it’s just ‘Dry January’ or cutting back a bit in the New Year, good luck! I raise my glass of Nosecco to you!

Celebrating Christmas with a glass of Nosecco

Nature's beautiful candy... 😋❤
Finally got myself down to the @vanguardstreetart exhibition at the M Shed @bristolmuseums today, and it was worth the wait! It was really interesting and there was some absolutely gorgeous art there! ❤
Corn... 🌽😋💛
Not bad for £1.50! Thanks @lidlgb 💚 Now... does anyone have any recipes for corn on the cob? I've never cooked one before! 😂
When @britishbakeoff is on and there's nothing sweet in the house... bake some cookies in the ad breaks! 😋💚
Tonight we went through some lovely, simple spins. The first video is a backhook, step out, step around. The second is a backhook unto a mermaid. 🧜‍♀️ Loving the journey, pushing myself but also respecting where I am right now. 💜
Loading Comments...