Not taking the biscuit

It’s one thing to repeatedly tell yourself year after year that you need to lose a bit of weight, but it’s something else entirely to be told by a doctor.

I’m not obese. In fact, most people I know genuinely don’t think I need to lose much weight. I ‘m tall and I carry it pretty well, plus I know how to dress for my size. Most people would probably call me curvy or, shudder, cuddly.

But today I sat up and faced facts. I need to lose three stone, so I will. It’s not going to be as easy as that though, I know. Take today for example: my lovely colleague offered to make me tea (which I drink with sugar) a number of times. I politely declined, made myself a chamomile tea and drank loads of water. I was feeling very peckish in the afternoon, and I was offered some amazing smelling Fortnum and Mason biscuits which we had in the office. I wanted one, I really wanted one, so in the end I let myself have a tiny broken corner of one, smaller than a 5p piece. It was really good.

Serious willpower is what I need to accomplish my goal. I’m not going to sit here and say I won’t eat any more chocolate, biscuits or cake this year. We all know that’s not going to happen. I’ve abandoned my Marshmallow Experiment because it was simply too tempting to have chocolate sitting there in the fridge. So, I’m going to try not to buy any calorific food, and allow myself a few treats when I’m out. Let’s see how I do…

Incidentally, the phrase “to take the biscuit” (used in a situation where something is particularly bad or objectionable) is British English and our friends across the pond actually say “to take the cake”. Well, language differences aside, I won’t be taking any cakes or biscuits for quite a while, I think! 😉 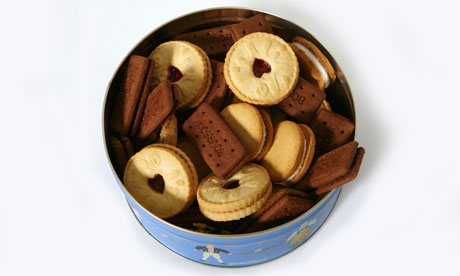 Even though it’s September, and eight months of 2011 have already gone by, I’ve decided to join WordPress.com’s Post A Week initiative. Actually, I decided to join last week, but I got “too busy to post”. This is becoming a habit which I need to break, so I’m forcing myself to do a quick post tonight.

I’ve decided to use five random questions from Plinky Prompts to make a little Q&A. If you’d like to add any further questions in the comments box below, I’d be more than happy to answer them! 😉

Cake – every time! Especially cupcakes. I’m having a bit of a thing for cupcakes at the moment, and this week is National Cupcake Week, which is pretty exciting.

When are you happiest?

Funnily enough, I was asked this question in an interview recently. My response then was “when I’m lying in the bath with a good book”. That’s still my answer, but sadly I don’t have a bath (only a shower) at the moment. It’s killing me, but my books are less soggy.

If you could become two people right now, what are the first two things you’d want to do?

I’ve been so busy lately, that becoming two people would be really nice! I’d leave one of me at home to finish writing all the blog posts and articles I’ve started, while the other went to work. I’d let the work-me go out after work to exhibitions and parties, while the writing-me just stayed at home and wrote about it all.

Would you rather be a food critic, a book critic or a film critic?

That’s easy – a food critic! I’ve been dabbling in restaurant reviews recently over at Haikugirl’s Japan, and it’s something I’d like to get into more seriously. Naturally, I’d be happiest reviewing Japanese restaurants, or pâtisseries…

What’s your favourite month? Why?

It’s probably December, because my birthday and Christmas are both in December. I like that winter feeling, of wrapping up in coats and gloves, going out to a place like Covent Garden and seeing all the Christmas decorations. I’m crazy about Christmas and love any excuse to put a bit of tinsel up… 😉

Can you think of some more questions for me? If they’re good enough, I might even turn them into a whole new post!

Just messing around at the end of Floor and Flow tonight... 😜
Floor and Flow tonight was great! It really inspired me to start writing my next show routine for April! 😘
And of course, weekly Jasmine! It was a bit of a challenge on a 40mm pole, but after many attempts (and lots of grip!) I got there! 💪😘
Pumpkin came to the studio to support us all today, which was very tiring work! She was such a good girl! Thank you pumpkin (and @robynpoledancer) 💜
That feeling when you get your reverse grab back! 🤩 I got it before Christmas on this pole (which is 40mm rather than the 45 I usually train on) and then I 'lost' it. But I came to practice today to do this, and I'm so proud. I nearly didn't go to practice at all today and I'm so glad I did now! Thank you all for the support! 💜
Really blooming, as I intend to! 💐☺️💜
Loading Comments...