Around this time last year I decided I was going to give Veganuary a go. Veganuary is a charity and a movement which encourages people to go vegan in January and supports them in their vegan journey throughout the month and if they choose to keep going. As a pescatarian and former vegetarian who hasn’t really eaten meat for the best part of 25 years, I planned to just go vegan for January and then go back to eggs and fish at least. Dairy I wouldn’t miss – it didn’t always agree with me anyway – but I didn’t really think I would be able to give up eggs and fish as they seemed so essential to my diet.

My main reason for giving Veganuary a go was for the culinary adventure. I wanted to get back into cooking and try some new food, and I wanted to get out of some of my stale habits. There are lots of reasons one might choose a plant-based diet, and if the focus is to be plant-based rather than vegan, the reasoning is more likely to be health and diet. That being said, I ate a lot of amazing vegan junk food and cake in January, so I don’t want anyone reading this to think it’s all lentils and chickpeas! I also don’t want to give any wrong impression that veganism or choosing to eat plant-based is a ‘diet’ in the sense of it being a plan with which to lose weight. It’s not, although there can of course be fantastic health benefits to any change in what one chooses to eat, and cooking more from scratch and eating more vegetables and pulses can only be a good thing in terms of health. 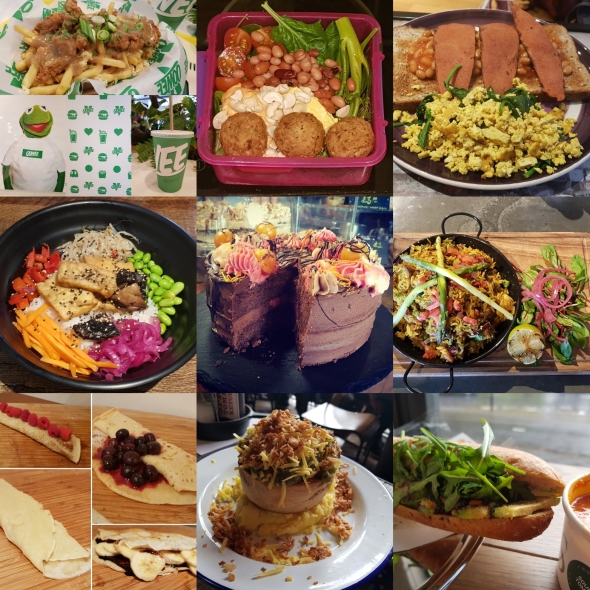 So, it was all about food to start with. I was excited by how big Veganuary was this year – all the supermarkets had lots of exciting new things to try, and of course there was the Gregg’s vegan sausage roll too! 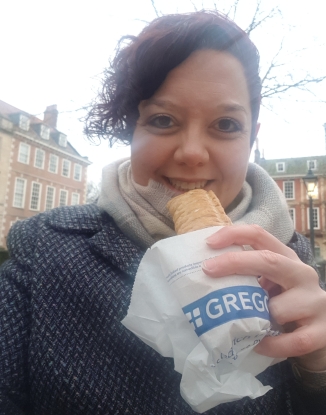 The Gregg’s vegan sausage roll – so many excited vegans across the country!

However, as the month went on I began reading, watching documentaries and educating myself, and I learnt more about the other reasons one might choose to be vegan. Of course, the main reasons are usually the environment and animal welfare. Although I’ve always been someone who likes animals and cares about the environment, I didn’t think eating a bit of fish and a few eggs were that big a deal. What did it matter if I put a bit of honey on my porridge or my shoes were made of leather? I never thought about the plastic my food and beauty products came in, and I certainly never checked to see if my products had been tested on animals or contained animal products such as lanolin and collagen. 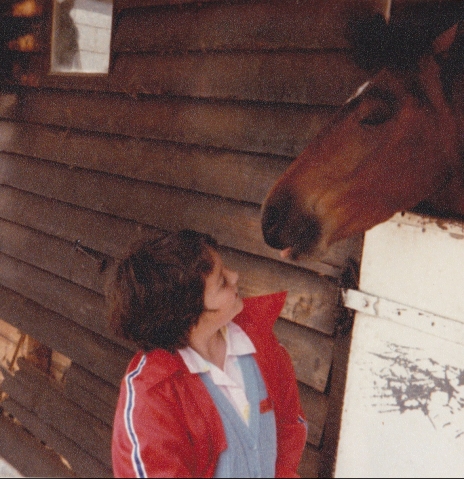 A friend to the animals even at a young age…

But at some point early this year, perhaps even in the middle of January, just a couple of weeks into my vegan journey, I made a decision that this wasn’t going to be just a month-long experiment. It was like I took a good look inside and found a label that said ‘vegan’. It was a light bulb moment of ‘oh, this is what I should have been doing all along!’. I didn’t know I was a vegan, but suddenly it all made sense and I couldn’t imagine living any other way.

The definition of veganism according to the Vegan Society states:

“Veganism is a way of living which seeks to exclude, as far as possible and practicable, all forms of exploitation of, and cruelty to, animals for food, clothing or any other purpose.”

During my journey this year I have cut out all animal products from my diet. That was instant, and coming from being pescatarian I can honestly say it wasn’t difficult at all. I haven’t craved anything or missed anything really, and there have only been a few odd occasions where I have had trouble finding something to eat or have felt a bit left out. But, on the contrary, there have also been some lovely moments where I have felt so included; where friends or colleagues who aren’t vegan have made deliberate choices to provide a vegan option because they know I will be there, and that makes me so happy.

Making changes in other areas of my life is more of a process and not something that can happen overnight. As I use up a beauty product I try to replace it with something vegan, cruelty free and with as little plastic as possible. I’ve made the switch from bottles of shower gel to solid bars, and other products are slowly being switched over as I can. When I’ve needed to buy new clothes I have tried to look for vegan and sustainable options too – who knew a pair of trainers could be vegan! I just never thought about it before. 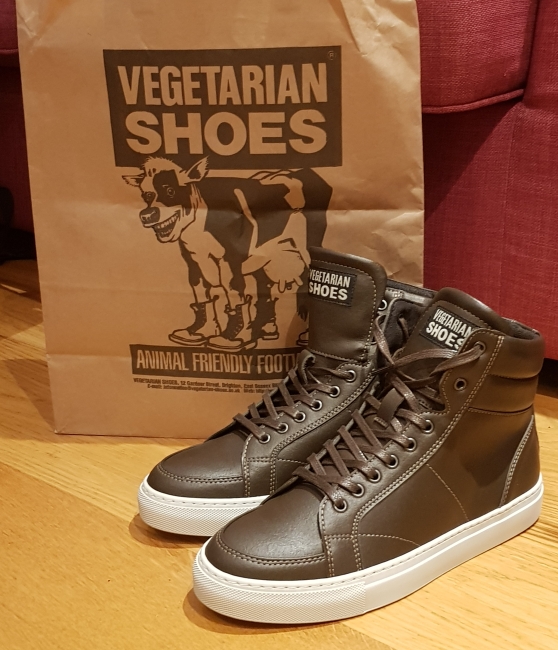 Above all else, this year has made me think so much. I just never considered whether it was right or wrong to use animal products, and I didn’t know about the exploitation of animals in order to provide us with everyday products like a pint of milk or an omelette. The environmental impact of eating meat and fish had never really occurred to me, and I was used to choosing the simple and fastest option, without thinking about how sustainable it was.

So, this was the year I discovered I was a vegan. I’m not writing this to preach at anyone else – you do you – but I do want the world to know I’m a vegan and I’m proud. I will continue to shout about it on Instagram, because I want people to see the delicious food a vegan can eat, to see how healthy I am (not protein deficient!) and to see the choices I make which make less of an environmental impact. Perhaps my choices can help to inspire another person’s choices, and that’s all I can ask. 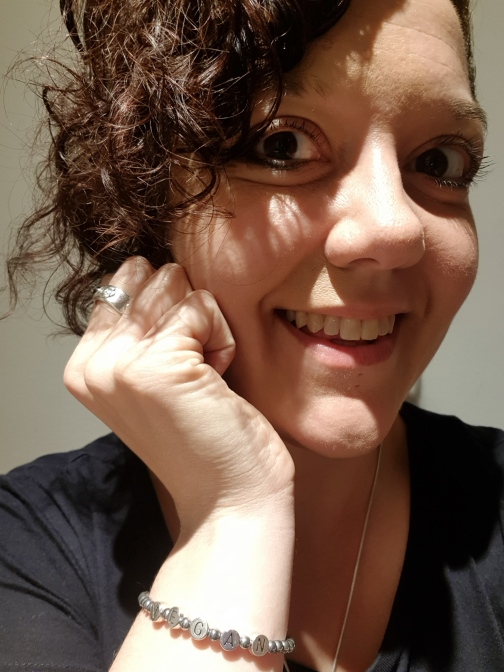 I know this blog has been silent for over a year, but I’m back! Watch this space for more adventures as I continue in search of my ikigai…

I just moved into a new flat in London. It’s a teeny, tiny studio flat – basically a room above a shop with a small kitchen and small bathroom. I don’t mind that it’s teeny tiny – that’s not what’s rubbish. What’s rubbish, is the rubbish situation…

I can’t figure out where to put my rubbish. Before I moved in, I casually asked my letting agent as we were walking to the flat, and he pointed out an alley way. He told me to just put it in there, which seemed a bit strange to me.

Not sure about the alley way situation, I decided to email the council. They replied promptly and politely, and informed me that I should have a wheelie bin. They also told me that if I put my rubbish in the alley way it could be considered fly-tipping.

I have no wheelie bin.

I’ve looked around, and there isn’t even a place where wheelie bins for the five flats in this building could be. What’s more, the council website says that waste is collected every two weeks. So, does that mean I am supposed to store up my rubbish in my teeny tiny kitchen for two whole weeks until I can run outside and dump it in the alley way? If I dump it in the alley way before it’s due to be collected, foxes will probably open it up all over the street.

The council did very kindly provide me with a phone number which I could call to order a new wheelie bin. However, even if I did decide to splash out £15 for a bin, I would still be stuck for somewhere to put it.

On another rubbish-related point, I also asked the council what I should do about recycling. I was informed that, as I live in a flat, I am “not required to recycle“.

This was quite a shock to me. I thought we were supposed to be upping our environmental-consciousness and recycling more. I had already started separating out my paper from plastic, but no one cares – because I’m living in a flat.

Has anyone else in London experienced a similar problem? Can anyone offer a solution? 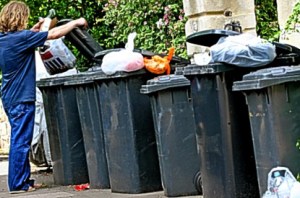 Nature's beautiful candy... 😋❤
Finally got myself down to the @vanguardstreetart exhibition at the M Shed @bristolmuseums today, and it was worth the wait! It was really interesting and there was some absolutely gorgeous art there! ❤
Corn... 🌽😋💛
Not bad for £1.50! Thanks @lidlgb 💚 Now... does anyone have any recipes for corn on the cob? I've never cooked one before! 😂
When @britishbakeoff is on and there's nothing sweet in the house... bake some cookies in the ad breaks! 😋💚
Tonight we went through some lovely, simple spins. The first video is a backhook, step out, step around. The second is a backhook unto a mermaid. 🧜‍♀️ Loving the journey, pushing myself but also respecting where I am right now. 💜
Loading Comments...