Something New Every Day Challenge: Day #4

Today’s ‘something new’ was easy to find as it was waiting for me on an empty Tube seat: 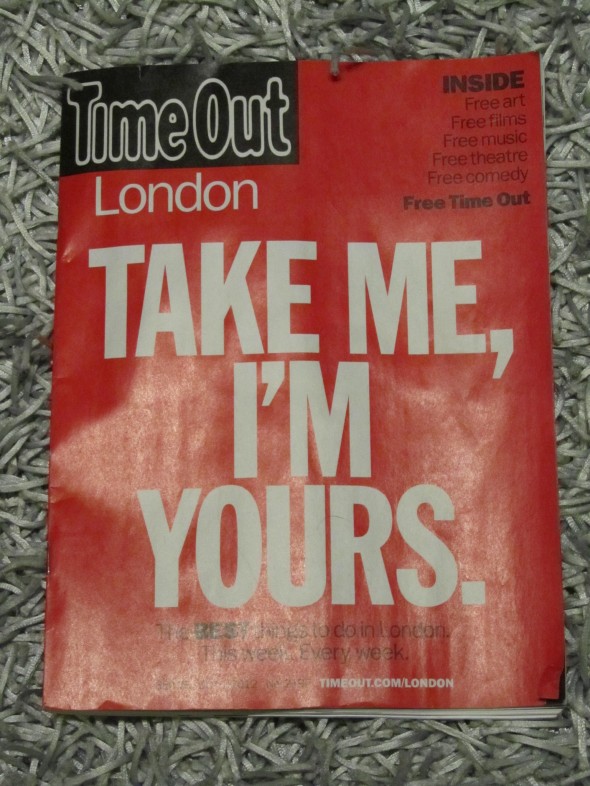 Yes, from today, Time Out London magazine has become a free publication, handed out at train stations during the daily commute. I have, of course, read Time Out before, but it’s a new initiative to make the magazine free. I suppose sales must have been down due to the large amount of content available on their website, and also because of the other free publications which are available in London.

I have to admit though, I’ve never really liked the format of Time Out magazine. I quite like their website, and love the weekly emails highlighting free things to do in London and advertising competitions, but I’ve always found the magazine a bit of a waste of money. So, does being free make it any better? For me, no. As I’ve mentioned on this blog before, I’m prone to a bit of FOMO (fear of missing out), so adding another free publication advertising things to do in London to my already growing pile is actually a really bad thing for me. Every day I can pick up the Metro and Evening Standard, and then once a week I find Stylist and Shortlist thrust into my hands. Sometimes other free magazines like aMuse Magazine pop up too. All of them have online versions as well as paper versions, and all of them are bursting with far too much information and more “things to do” than any human could ever possibly fit in. It’s exhausting!

So, after flicking through my new, free copy of Time Out, I recycled it, and decided not to bother picking it up again. Along with all of these… 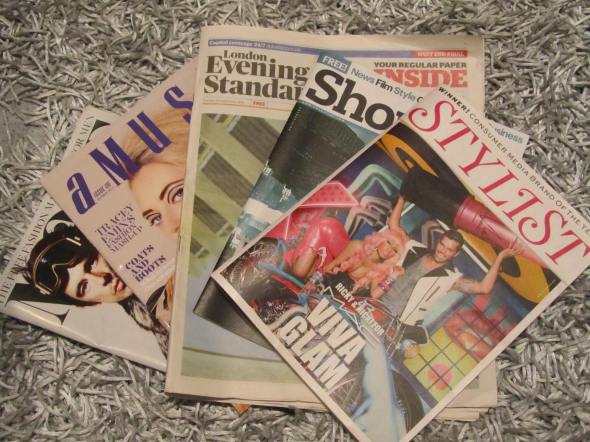 My other new thing today is to try to put myself first a bit more. I was supposed to go to a talk tonight, which no doubt would have been interesting, but I wasn’t feeling great and I wanted to go home, eat something warming (veggie sausages, homemade oven chips and Baked Beans!) and blog, so I did. I need to learn that I and only I make my decisions, and I mustn’t feel like I’m under any obligation to do things if I decide I don’t want to do them.

The ‘Something New Every Day Challenge’ is going well so far. I’ve decided to try to keep it up for 7 days, and then after that it will just be as and when I can, as it will become too much to post every day (especially with November and NaNoWriMo coming up…). So, 3 days to go…

The fear of missing out (FOMO) is a blight on London life. It is why your mate is checking his iPhone under the table every five seconds; it is why you agonise over what to have for dinner; it is probably why you have a Facebook account, too. In Missing Out: In Praise of the Unlived Life (Hamish Hamilton) psychoanalyst Adam Phillips formulates an elegant argument about why what we don’t do is just as important as what we do do. Frustration is fundamental to satisfaction; regret is nourishing; not getting is good. I would have found it comforting if I didn’t have a hundred other books I could have been reading. (Richard Godwin, Evening Standard, 30th May 2012)

It was towards the end of last year when I first heard the term “FOMO”, or “fear of missing out”, and I’ve been meaning to write a post about it ever since. As soon as I heard the term I recognised it as the way I have been feeling not just since I’ve been back in London, but also while I was living in Japan. There’s just always so much going on, never enough time in the day, and no way I’ll be able to do everything no matter how organised I am and how many post-it notes I use (and believe me, my world is wallpapered with post-it notes!). Today, with the Jubilee weekend almost upon us, I seem more full of FOMO than ever.

In the same issue of the Evening Standard there was an article called Should I Stay or Should I Go? in which two writers were asked if the Jubilee holiday was a cause for celebration or a great chance for a four-day getaway.

Nirpal Dhaliwal responded saying that like many thousands of other Londoners he would be celebrating the Queen’s Diamond Jubilee this weekend. He pointed out that it was a good time to get to know your neighbours and have a street party, and to celebrate being British (something people often regard as “somehow backwards or even sinister”). I agree that it would be nice to know the names of the people on my street but, as far as I know, no one is planning a street party (we could actually, and it would be lovely, as I live on a dead end street). If there were a street party going on I would no doubt pop down and join in, but I somehow can’t see it happening.

The other side of the argument in the article comes from Jasmine Gardner, the “Jubilee Jetsetter” who has worked out that this Jubilee weekend offers a “17 for the price of nine annual leave deal”. She has no qualms about leaving all the bunting behind and going off on holiday somewhere fuss-free, and I can’t say I blame her. If I had the money, I would be packing my bags for the airport to catch a flight to anywhere-but-here.

Sadly, I don’t have the money, which leaves me in London for the weekend. I’m sure if I was abroad somewhere, a little part of me would be wondering what I was missing out on back home, but I would be too excited by being in another country to really care. However, I’m here in England with no real distractions, left with this feeling of obligation that, seeing as I’m here, I really ought to join in. If I don’t do something for the Jubilee, will I regret it on Wednesday morning when I get back to the office and everyone is talking about what a jolly good time they had with their families and friends, or how amazing the flotilla was, or how many cupcakes they ate in the vintage village fete they attended? Will it haunt me forever that I wasn’t part of this historical event?

The fear has set in. I’m scared I’ll miss out on something good if I don’t join in some jubilee shenanigans, but actually I would love to have a quiet weekend at home catching up on blogs, tidying my flat, uploading photos, etc.

The next hurdle I stumble at is, if I do go out and do something, what should I do? Squeeze in with the rest of London (and half of the rest of the world, or so it seems) to watch some boats go along the Thames and hope for a glimpse of the Queen. Surely I’d get a better view (without the leg cramp) if I watched it on telly. Have a picnic with my friends in Hyde Park and watch the concert on screens? Er… isn’t that just like watching telly in the park (and it will probably rain…). The only event that might actually tempt me out of my cynicism is the event at Boxpark in Shoreditch, but only if the weather’s nice.

So, what are you doing for the Jubilee weekend? Do you have your bunting and Pimms at the ready? Have you already left the country? Will you be down at the Thames or in Hyde Park? Or are you going to hide from it all and just watch a bit of telly at home? Do let me know… because I’d hate to miss out on what you’re doing too! 😉

I did a thing I'm really proud of in pole tonight! ❤ But I also want to share the reality with you. Pole is really f*cking hard, and it takes loads of practice to make it look even half good. But that's ok, because life is basically the same. As always, I have so much respect for the professionals! @robynpoledancer, I don't know how you make it look so easy and graceful, but I'm going to learn! Somehow... one day... 😁
It's time for my Monday night pole spam! 😁 Here's me being a mermaid... 🧜‍♀️
Good to see my favourite boat the Matthew out today, and fun watching the different swing bridges working to let it through. ⛵🤓
Red alert... ❤😘
Bit of bendy drama on a Sunday... 🤩
Thank you @d.f.t.e ❤
Loading Comments...
Comment
×