The locks of love…

On my recent visit to New York I was very keen to visit Brooklyn Bridge, mainly because I had seen it featured in Sex and the City, and wanted to see the view of Manhattan from Brooklyn. One particular scene from Sex and the City had stuck in my mind, and that was the one in the first movie, where Steve and Miranda meet on Brooklyn Bridge to show that they are willing to forget the past and continue with their marriage. 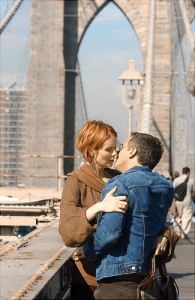 But I hadn’t realised that Brooklyn Bridge was such a popular place for romance. Apparently Brooklyn Bridge has become the place for couples to declare their eternal love to each other by attaching a padlock to the bridge.

Scores of locks have been lovingly left on the bridge, some with messages, names or dates written on them, others plain. Despite the fact that it is actually illegal to attach anything to the bridge, there are these handy little loops all over the place, which people have cleverly made use of.

The tradition dates back to a book by Italian novelist Federico Moccia, which became popular when it was turned into a film, “Tre Metri Sopra il Cielo” (“Three Steps Over Heaven“), in 2004. Following the popularity of the movie, couples began declaring their love on the Ponte Milvio in Italy. Sometime later, perhaps around 2007, the tradition made its way over the Atlantic to the US, and people began to attach their love locks to the Brooklyn Bridge.

As I said, it is illegal to leave these locks on the bridge, but no one seems to be doing anything about removing them. And, really, what harm are they doing?

I wonder now if that scene in Sex and the City was inspired by this tradition of declaring one’s love on Brooklyn Bridge, although Miranda and Steve don’t actually leave a lock.

What do you think? Is leaving a lock on a bridge a good way for a couple to declare their eternal love? Would you do it?

I have a confession to make. Recently, and not for the first time, I have got into a book, even though it’s meant for kids or teenagers. Yes, me, a fully grown woman, reading books about teenage vampires.  I’m talking about Twilight, of course.

As I said, this is not the first time. Before Twilight came along, I read Harry Potter.  In both cases, I resisted reading the books for a long time.  Even when they became hugely popular and movies were made of them, I still tried to resist.  I thought I should be reading grown-up books. But, both times, a friend eventually recommended the book to me, and I do like to trust a friend’s recommendation. So, I gave in.

As for Harry Potter, I enjoyed reading the books, although I grew a bit tired by the time I read the last one.  I felt it had gone on a bit too long. I also watched the movies, but gave up on them somewhere along the way. The movies were good, but much more for kids than the books, I felt. The books, despite being written for kids, included a lot of adult themes and jokes; things which would perhaps go unnoticed by the younger kids.

Twilight also seems very adult, despite being written for teenagers. Actually, when I first started reading it I was still resisting, and still thinking “this book’s for kids!”.  But, about half-way through, when it started getting really romantic, I found myself getting drawn in further.  As a teenager, I had been really into vampire stories – I liked Anne Rice and Buffy the Vampire Slayer and reading Twilight just brought it all back for me. I guess it makes me feel like a teenager again, and that’s why I like it (god I sound old!).

I do have one final guilty pleasure to confess: The Carrie Diaries.  This is a prequel to Sex and the City, about Carrie as a teenager and, actually, I didn’t realise it was meant for teenagers when I bought it! It wasn’t until I started reading that I cottoned on. But, despite that, I really enjoyed it and can’t wait for the next book. It was painfully funny at times and, again, reminded me of being a teenager.

So, this all leaves me wondering: should I be writing books for teenagers? I had feared that perhaps teens would soon be quitting reading in favour of computer games and movies, but it seems that maybe that isn’t the case – yet.  Anyway, if I write a book for teenagers and no teens want to read it, I’m sure some adults will! 😉

I was walking home tonight, when I saw guy I know from work waiting at the bus stop.  Normally I would just say ‘hi’ and continue walking (I don’t know him so well), but he waved me over with a huge grin on his face.

His reply was to show me his cell phone with a picture of his two-week old baby boy on it. (Last time I saw him, he was still expecting.)

The thing is… I faked it.  Just as Miranda Hobbes fakes her sonogram in Sex and the City (Season 4, “Change of a Dress”), I faked my reaction to this guy’s baby.  I mean, yeah, it’s great news. And he was clearly thrilled. But it’s so hard to get excited about other people’s kids.

I’m definitely at that age where all my friends are buying houses, getting married and having babies (although not necessarily in that order!), and I can’t help wondering… is there such a thing as a ‘settling gene’?  And, if so, do I have one?

As a single girl in her (gulp!) late-twenties, living in rented accommodation, and doing a job which, let’s face it, probably isn’t a lifelong career, I really do feel worlds apart from most of my friends right now. But I have no maternal instinct urging me to settle down and procreate. I do want to buy a house someday, but I don’t know where I want to live yet. And I don’t know if I want to buy that house with someone, or go it alone.

Two of my co-workers are planning weddings right now, and two of my best friends back home got married last year.  Another of my friends back home is getting married really soon, and one of the best friends mentioned above is about to have her first baby. I’m thrilled for them all, I really am.  But I do find it hard to really be interested in it all when, honestly, I’m not. I’m mean, of course I’m interested in my friends and what they’re doing. But I’m not really interested in weddings and babies.

Is it possible that I am in fact just missing a gene? A gene which would make me dream of white weddings and storks?  I am romantic, and I’m not opposed to the idea of settling down (with the right person), but it doesn’t seem to be something I’m going to be doing this side of thirty. And if I do settle down, I really don’t think there will be any babies!

I don’t think I’m completely alone in this line of thought, though.  In fact, I’m reading a great book at the moment (The Group by Mary McCarthy), with this excellent line in it:

“It was plain to Polly that many of her married classmates were disappointed in their husbands and envied the girls, like Helena, who had not got married.”

Maybe I, like Helena, could seem to have an enviable life, at least to those who are unhappy with their own. I have no ties, from either a husband or a baby, which means I am able to live in a foreign country and basically do as I please. My free time is my own, my money is my own, my choices are my own.  I don’t really have to answer to anyone, and I’m free to change my mind, my hairstyle, and my sheets 😉 as often as I like.  Maybe I’m better off without the settling gene?

What do you think?

Good to be back in Bristol and already finding my favourite little messages of hope and positivity! Thanks @theartkindness ❤
Did my first ever spin class at @dreamfitness_bognorregis this morning - hard work but fun! 🚲🥵 Fortunately that was followed by a vegan cinnamon swirl from @bluebrew2019 on the beach for my breakfast starter, and brunch at @the_brunch_house_ - yum! 😋💚
I can never get enough of the sea when I'm back in Bognor... 🌊💙
Hello red admiral! 🦋 Thanks for stopping by the garden this afternoon! ☺️❤
Had a lovely wander around Staunton Country Park today. 🌳🌿🌱 Loved the Chinese bridge and water lilies! ❤
A little bit of Worthing... ❤
Loading Comments...