The other day, I was reading an article in the Evening Standard called 30 things to do before you’re 30. The article referred to the now grinning with pride Beyoncé pictured below, and how she had managed to get pregnant just in time – she’s 29. 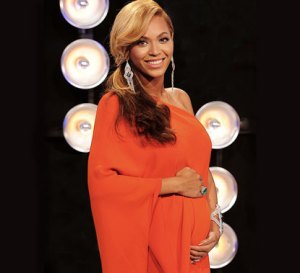 See how she glows? She’s glowing with relief because, at 29, she must be feeling the pressure. There are just so many things one must do before turning 30 – everybody says so.

According to the article, when people are faced with turning thirty, they think they ought to have bought a property, had a baby, co-habited, owned a designer handbag, written a book, dropped their last “e” (what?!), learnt a language and lived abroad. Phew. I’m exhausted just thinking about it.

Given that I only have just over 3 months before the big three-oh hits, I don’t think there’s much chance I’m going to cross everything off the list.

But, you know what, I don’t really care.

I used to have this feeling that turning thirty was the be-all and end-all. I know people who still think this – friends who are getting their knickers in a twist because their birthdays are approaching and they’re not married/up the duff/living in their dream home/all of the above.

I’m living in a really shitty little flat at the moment. It’s worse than some of the places I lived in when I was a student. But, you know what, I can afford it. My salary is low, but I’m budgeting my living expenses to match. For once, I’m not living beyond my means.

My twenties have been about working out what I want from life. I hope my thirties will be about achieving those things. I don’t think I need a list though, do you?

Getting grippy with @grip_and_glow! ❤ Very excited to try this new grip for pole and so pleased my 'back to the studio' set included a mini sized 'If You Like Pina Colada' scented grip! 😍🍍🍹 I do like pina colada (well, virgin!)... and getting caught in the rain! 🌦
Officially a #poledestroyer now I've got the T-shirt! 💪😘 Hoping this will give me some kind of super powers to unlock the next level of moves in this crazy game called pole. 🙃❤
My milkshake brings all the boys to the yard... 🥤💚😘
The water is so sparkly today! 🤩 Also, loving this #craftivism sign: "Love will save the day". ❤🧡💜
Getting millimetres closer every time! 😂
Found a swing, would have been rude to have ignored it. 😉 Also found a duck family and a robin. Good day for nature! 😁💚🦆
Loading Comments...
Comment
×
%d bloggers like this: